Statement of Jonathan Franks on behalf of Montel Williams:

“It unfortunately appears likely that Congress will not reach agreement on legislation aimed at reforming the Veteran’s Administration prior to the August recess.  Mr. Williams believes it is axiomatic that the responsibility of caring for those who served is part and parcel of the cost of war, yet wonders about the wisdom of additional funding for  the Veterans Administration while such serious accountability problems exist within the agency. That said, given that much of the Iraq and Afghan wars were financed with debt, it does ring hollow for some of the same Members who voted to pay for the wars with debt to now raise fiscal concerns regarding the care of those who fought them.”

“For weeks now, Mr. Williams has proposed an idea to serve as the basis for beginning to solve the problem. That idea, which went viral on social media under the hashtag #vasurge, has become the subject of a White House petition. While Mr. Williams does not claim to have all the answers,  it seems that fixing the problems at the VA have become mired in election year politics with both sides dug into the blame game.”

“Mr. Williams believes veterans have already paid their due. It’s time to stop the partisan pandering and honor our end of the bargain. He calls on our elected leaders to take Veterans off the political battlefield. Veterans deserve nothing less of their Government.” “Tonight Mr. Williams will launch a new hashtag #United4VASolution.”

“How can a nation that won’t take care of the best of us care for the rest of us?”

Montel Williams is a decorated former Naval Officer having spent 22 years in the Marines and then the Navy.  He is a graduate of the United States Naval Academy 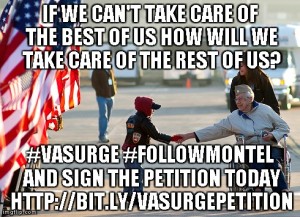 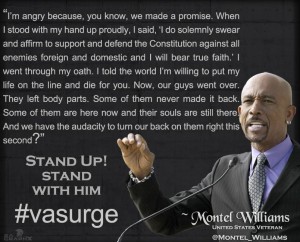