Miami – Montel Williams and Montel Williams Enterprises, Inc. have filed suit in Federal Court in Miami against several corporate entities including three based in Arizona along with Timothy Isaac, an Arizona resident and member of the three named Arizona entities, relatingto claims of fraudulent online medical cannabis scams that are deceiving consumers. 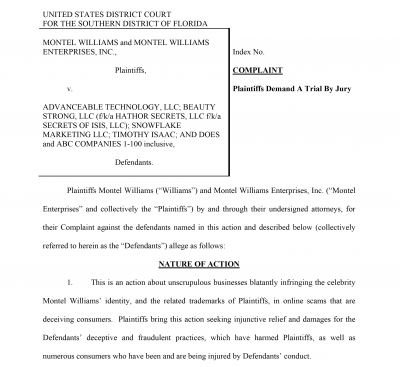 The complaint alleges that the Defendants, many of whom are believed to have acted together, engaged in an elaborate online scheme that involved, among other things, lifting the contents of a Forbes article about Mr. Williams’ public advocacy for medical cannabis since his diagnosis with multiple sclerosis in 1999 and repurposing that content on sham websites and in social media that misappropriated Mr. Williams’ name and likeness to fraudulently claim he endorsed their “CBD oil.” Consumers were then asked to sign up for a “free trial” that turned out to be anything but free, locking consumers into an automatic monthly credit card billing scheme with no clear way to cancel.

“It’s important to remember that these scams  are anything but victimless. They are, in fact, calculated to prey on vulnerable consumers, many of whom have chronic illness or other disabilities,” said Jonathan Franks, spokesman for Montel Williams. “As explained in the Complaint, we heard from elderly customers and veterans on fixed incomes who incurred unexpected overdraft fees as a result of these scams.”

The Defendants purported to be marketing CBD oil derived from hemp. This type of CBD oil is a cannabinoid that is not intoxicating, which research indicates may have a wide variety of medicinal benefits, probably most notably the treatment of epileptic seizures in children. As alleged, however, it is unclear whether any of the products marketed by the Defendants were legitimate CBD oils.

“Simply put, as the Complaint sets forth, the network of shadowy corporate entities we believe are involved in these scams, one of which was named ‘Secrets of ISIS’ for some time, sought to deceptively use Mr. Williams’ credibility in the medical cannabis space against vulnerable consumers without regard for the consequences,” said Franks. “This wasn’t a mistake. As alleged in the Complaint, this was the deliberate theft of Mr. Williams’ name and reputation to weaponize it against sick people, and this lawsuit isn’t about lining Mr. Williams’ pockets, it’s about holding the perpetrators of these scams accountable and to stop them from continuing to deceive consumers.”

Mr. Williams and Montel Williams Enterprises, Inc. are represented by the law firm of Davis & Gilbert LLP, which is a leading law firm for the marketing and communications industry and widely acclaimed for its work in shutting down fraudulent celebrity endorsement scams.

Note: Exhibits to the Complaint may be found here: