Jones, who constantly rants about so called “false flags” threw up one of his own today by claiming his dispute with Montel Williams has to do with Jones’ support for veterans – he knows full well it’s about Jones’ almost compulsive claims that school shootings are staged events – a claims he knows full well re-traumatizes children that are the victims of violent crimes.”

“On today’s show, Mr. Jones insinuated that Mr. Williams had attacked him relating to InfoWars’ support for Veterans and had Joyce Riley on to relay a story about Mr. Williams not reviewing documents relating to Gulf War Illness back in 2004.  Mr. Jones is fully aware of why Mr. Williams has focused attention on him – it is solely related to Mr. Jones’ insistence that school shootings are “false flags,” which, translated into reality means “staged” in an effort to advance gun control legislation.  There is zero ambiguity on that – in fact, Mr. Jones is well awar 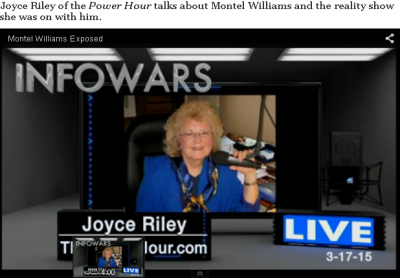 e some of his own colleagues have communicated to Mr. Williams that they don’t agree with Mr. Jones’ position.”

“Mr. Williams started his career after the military speaking at 1000’s of schools across the country, and regularly visits those schools where these acts of mass violence occur.  Mr. Williams thus understands the impact it has on children who are already the victims of trauma when Mr. Jones or those whom he eggs on suggest (sometimes online to the survivors themselves) that the tragedy they lived through was merely an event staged by the Government to advance an agenda to “take our guns.”

“Further, Mr. Jones’ odd focus on Mr. Williams only began when he refused to appear on the show and “debate.” Mr. Williams has no need to debate Mr. Jones, nor, quite frankly does he want any of the kids who have already been massively overexposed by the media to hear him (live or after the fact) debating about whether what the trauma they still live with was real.”

“We certainly respect Mr. Jones’ right to make frequent outrageous claims about Government mind control, fluoride poisoning, etc., just as we respect his right to deliberately re-traumatize children who have been the victim of violent crimes.  We respect that launching outrageous conspiracy theories is his business model and the niche he has carved in a crowded media market, that said we will not apologize for standing up for children who have been the victims of violent crimes.”